Preparing or purifying onium hydroxides of the elements N, S or P by Electrodialysis/ EDBM.

Aqueous solutions of quaternary ammonium hydroxides, especially of TMAH, are often used as developers for photoresists in printed circuits and in chip manufacture. Often, however, the particular application demands that in addition to the abovementioned ammonium hydroxides, industrially available on a large scale, those carrying larger organic substituents be used, for example when employed as phase transfer catalysts or in the production of zeolites.

Examples of salts which can be Electrodialysed include: 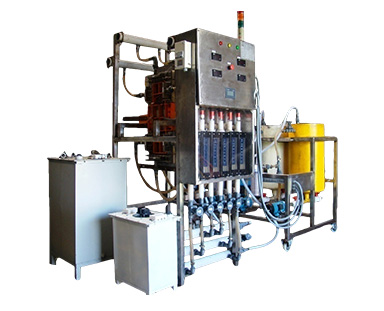 Examples of quaternary phosphonium halides include

The Electrodialysis stack comprises electrodes (anodes and cathode) at both ends of the stack and a series of membranes and seals which form a multiplicity of separate volumes. A solution to be subjected to electrodialysis is fed in, as a rule, through a number of feeders, said number being defined by the number of the volumes of the cell units of the entire stack. Stacks forming the totality of the electrodialysis apparatus can. for example, include just one type of cell unit, but alternatively a number of different types of cell units can be present in each stack.

We can provide Pilot Plants as well large commercial plants for such applications.